I Fall in Love Again

I’ve fallen in love. I don’t know how it happened, only a few days ago I was infatuated with another – how quickly things change. Who is this latest love in my life? Who has taken my heart forever? New Orleans.

I’ve only been here a few days, but it’s made me realize once again how much I love music, and how much I need it in my life. The sheer amount of great musicians in this town is mind-boggling. I could go out every night and see a different band/musician/group as long as I can keep myself awake. I look around at other people while watching and listening to the music, and a lot of times I’m the only one moving. For me, music is infectious and my body just reacts. I don’t understand why everyone doesn’t have the same reaction to music. Why is it that I can’t help myself? If I have one addiction, it is music. And New Orleans is the dealer. She’ll supply you with anything you need, and keep you coming back for more. 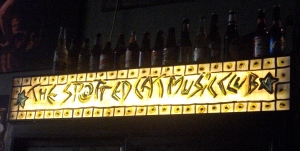 It was a great little place with music starting from 3pm to late in the evening, with 3 different bands. No cover, just a one-drink minimum per set. The first band was called Rights of Swing. One thing I learned was that, in the great New Orleans tradition, musicians work for tips. When I first got to the club, there were only a few people there. I wondered how they could afford to pay a band to perform with so few people there. It was 30 minutes or so into the set when I learned that they DON’T pay them; we do. I love the thought of so directly supporting music and the arts. In addition to the music, I met some great people there! I met a number of people that night; all great people, including one, Tracy, that I may have talked into applying for the Foreign Service. 🙂 The couple I ended the night with, Dan and Danielle, I danced with, I ate with, they even drove me back to my hotel! Pooh had a great time!

I went to another place (Margaritaville) on Monday, where I watched a musician named Truman Holland play. I think my favorite was a song he wrote about waking up to someone cooking bacon in her thong. 😀 I know more than a few men that would dream about that. Walking back to my hotel, I heard numerous street musicians playing. I think my favorite sight was a man walking down the street with an enormous sousaphone (a tuba that fits around your body, making it easier to carry) – where else are you going to see that?

Each day I learn something new – about the world, about myself. I’ve learned, being here, that food isn’t a high priority for me. Of course, while in New Orleans, I did make sure to try some specialties, but I think I only did that because it was something you should do while here. I had beignets and chicory coffee; I had some gumbo and po’boys. But food doesn’t satisfy me like music does. Food is for sustenance; music is for life. My time has been too short here; I know I need to come back.

If you get the chance, I would, run, run, run to New Orleans. You won’t regret it!

So, Where Are You Now?

Life is an Adventure with Endless Destinations

On the Way to a Healthier Jeni

Rantings of an Amateur Chef

Come believe with me.

I was once on an island and eight parakeets landed on me. I had positioned myself to welcome them. Hope has that effect. I want to see all of creation awaken with hope~ especially the Middle East. Anything is possible for those who believe. ☆☆☆☆ Come believe with me. ☆☆☆☆

The Life of Gizmo the Cat